We’re proud that we’ve been helping Isuzu Truck UK grow its market share and drive more sales for a number of years since our partnership began. Needless to say, when the company’s 25th anniversary came around, we were excited to create a video to celebrate the achievement. 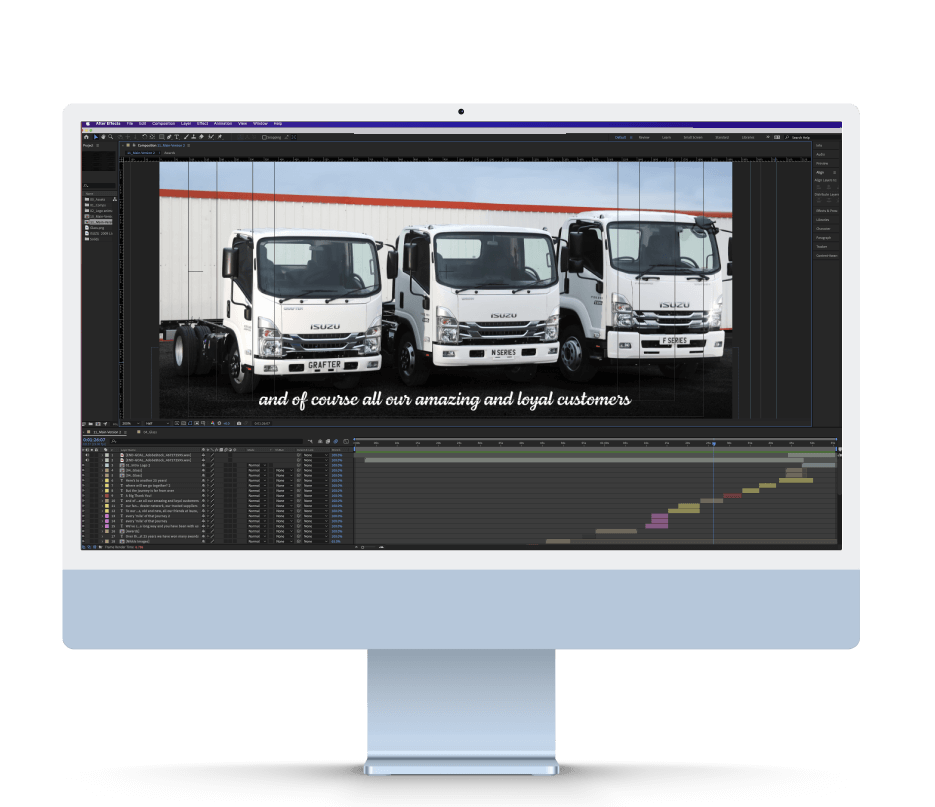 We were asked to produce a short video which Isuzu could share on social media and upload to its YouTube channel. The purpose of the video was to thank everyone involved for their hard work and continued support over the years, and allude to the future of the company.

The Isuzu team requested that the video had a warm and friendly tone that communicated the momentous occasion with enough personality to excite those watching. As a vehicle manufacturer, the client wanted the video to subliminally link to driving, journey, miles, movement and the company’s CARE Programme.

When we started working on this project, we knew it was going to be tough to create the video due to the limited resources we had at our disposal. Isuzu Truck UK could only supply us with static images., meaning our design team had to create some moving graphics from scratch to bring the video to life.

We were provided a number of images and an accompanying script that Isuzu had pulled together. They also outlined the style that they wanted us to convey for different parts of the video.

Overall, we wanted to ensure that we followed a storytelling approach, highlighting the journey that Isuzu Truck has taken, while opening doors to the future.

We selected an elegant and legible script style typeface to convey the emotion and personal touch Isuzu wanted to get across.

We ensured that we did some internal testing to be on the safe side before we sent the first draft to the client. We combined the imagery with music elements to ensure each stage is more impactful.

For this project, the music was our starting point. Selecting music that helped us to create the correct feel and atmosphere for the video was vital to convey the desired emotion and guide the story of the message throughout the video. From there, we allowed the music to be the guide for transitions, points of impact in the messaging and tone shifts throughout the video.

Our designer used Adobe Illustrator to create graphics, such as champagne glasses clinking, 25 year animated anniversary logo which would appear throughout the video. Once these were finalised, they were imported into Adobe After Effects where the video was being created.

After Effects was then used to animate the images and ensure they appeared at the right times in the video. Next, our graphic designer started animating the text that Isuzu had supplied, ensuring that it appeared on each image so people could read along.

Using the limited resources but a great brief that allowed us to utilise our creativity, the video worked extremely well. The combination of the music, the transition of images, selection of text and animated graphics resulted in a professional video that Isuzu Truck UK was pleased to use to celebrate 25 years of business.

We love taking on challenges like these because we’re allowed to let our creativity truly shine. But that doesn’t mean we’re not able to deliver powerful marketing campaigns too, so if you need any marketing or design support, get in touch for a no-obligation consultation.

Brand / Marketing
Our relationship with Oleonix was formed because they wanted to update their branding with the development of a new logo, brand guidelines, and more.
View Case Study

Marketing
We won an award for our marketing support which helped Isuzu Trucks break its sales record two years running, achieving a 378% increase in sales enquiries in 2018.
View Case Study

Want to get in touch and discuss your requirements with a member of our team?