You may not consciously, but the impact of the font on a design that just feels ‘right’, or equally just feels ‘wrong’ cannot be over-estimated.

Fonts have different feels and connotations – to name one that gets a lot of bad press what would the impact of receiving a piece of collateral from a professional services business in comic-sans be?

The impact of your font choice goes beyond design as well – in a recent study two groups of people were given directions. One simply in Arial, and the other in a fancy (and harder to read) Brush font.

A simple font change made the directions seem so much more complicated people estimated they would take around 86% longer for follow.

If a different font can make that much difference to something as simple as directions how much effect could it have on how complex people perceive working with your business to be?

What are Your Options?

There are five main types of font, Serif, Slab-Serif, Monospace, Sans-Serif and misc.

Using simple, clean fonts to project a simple, clear and professional feel and helps drive the perception that working with you will be easy. Call to action, forms, about us sections and lists of services should all be in clear, professional looking fonts.

Whilst you want your customers and prospective customers to see working with you as simple, you may want to use fonts to help them to perceive the complexity of what you actually do.

Always remember, whatever fonts you chose, that however attractive a design may be, it is only good design if it supports, and enhances function. Your website is there to showcase your business, communicate information clearly to your customers and prospects, and likely, to encourage people to make an enquiry.

Using attractive but highly informal fonts like the blocky Impact or the heavily curled and stylised Parisienne can make your site look messy and hard to read. All these fonts have their places – but a B2B website is rarely it.

A Guide to Demand and Lead Generation 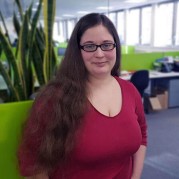 Lilly has broad ranging agency experience of over 9 years working with clients in diverse sectors on lead generation and digital marketing projects. She is Google certified and has worked on a range of CRM and Marketing Automation platforms gaining a strong technical and strategic understanding of this technology and how to deploy it effectively.

Find out how we can help

What Roles Does LinkedIn and Social Media Play in Modern B2B Marketing?

Social media channels can meet a broad range of objectives, from building thought leadership through to strengthening customer relationships. High-level marketers frequently discuss B2B and B2C strategies, but what modern role does social media play in B2B marketing? LinkedIn is a B2B marketers goldmine. Not only is it where C-suite…

Find out how we can help